The is the first in a (hopefully) long series of posts about classic books that I, as an English literature undergrad major, really need to read or re-read to make my life complete. 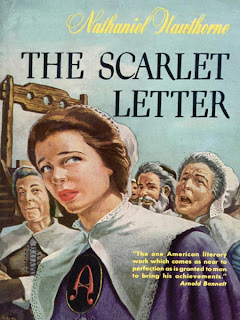 One of the things about Nathaniel Hawthorne, like with other authors such as William Faulkner and James Joyce and David Foster Wallace, is that it never feels like there's enough time in life. Ernest Hemingway is short and to the point. So is F. Scott Fitzgerald.

But Hawthorne fills his writing with diversions into the deep thoughts of his characters and interruptions in story flow for his own speculations on motives and the narrator's interactions with the reader, like an 1800s version of TV's The Office.

But beneath all of Hawthorne's quirks, The Scarlet Letter is one heck of a story, especially considering he wrote it in Salem, Massachusetts (amazingly over the course of a few short months). Home to the Salem Witch Trials a century-and-a-half earlier, this feels like the reflection of a past that still haunts the town and the Boston region at the time of publication in 1850.

Hester Prynne is condemned to wear a bright red "A" on her breast at all times for being convicted of adultery for having a daughter in her husband's long absence. Minister Arthur Dimmesdale, one of the Puritan leaders prosecuting her, is the secret father of her illegitimate child.

Also in the public square watching Hester admit her sins that day is Roger Chillingsworth, the old man married to Hester who has been away exploring the western wilderness for years. Exacerbating the townfolk's impressions of her as a witch, her daughter Pearl is a wild and undisciplined child who appears to be an evil spirit unfit for Christian society.

Chillingsworth follows the proceedings from afar until he intentionally becomes Dimmesdale's roommate, suspecting the priest of being his wife's lover. Dimmesdale, meanwhile, becomes weaker and weaker with guilt over the situation, oddly appearing stronger and stronger in his fervent sermons to his congregation.

Seven years after her public condemnation, Hester and Pearl are walking through the woods when they come upon Dimmesdale. The priest says, "Happy are you, Hester, that wear the scarlet letter on your bosom! Mine burns in secret!" Hester informs him that Chillingsworth, his roommate, is her estranged husband, and is cruelly making Dimmesdale's living hell far worse. She convinces him to make one more sermon and then escape to Europe to live with her and Pearl.

Dimmesdale admits his adultery to his congregation, exposes Chillingsworth's sinister nature, then collapses to his death. Chillingsworth dies a hunched and shriveled man within the year, leaving a fortune to Pearl, who takes her mother to Europe. Hester lives the rest of her life in better stead, but never does remove the "A" from her chest and is buried back in Salem with a gravestone labeled only with a red "A."