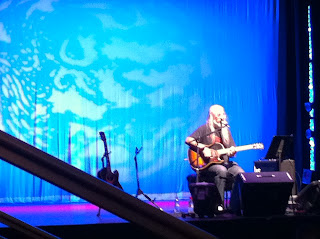 Dinosaur Jr.'s guitar master J. Mascis stumbled into the Kennedy Center's Millennium Stage tonight for a free, after-work, hour-long "acoustic" solo set that relied on a nice dose of effects that ratcheted up the sound to almost-daring levels for such an august locale.

The show was composed of classic songs from the 80s and 90s, with the best bits of Mascis' 2000s output. Max, Fran, and I and the other attendees (hipsters, art supporters, and intrigued but ultimately confused and sometimes-sleeping tourists) were treated to upbeat tunes almost the whole way through. That was until J. had to throw in the extended proggy "Alone" that featured a mix of sweet pickings and amazing tones out of his guitar that sounded like thunder and creepy door squeakings.

And then he walked out, simply saying that was all the time he had. The setlist: