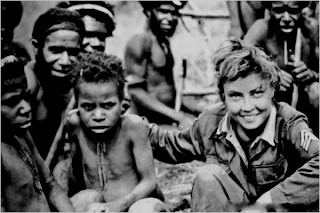 I recently was convinced to read Lost in Shangri-La after seeing author Mitchell Zuckoff eloquently explain the story's true WWII adventure as a guest on The Daily Show with Jon Stewart.

Apparently I'm not the only one impressed. Amazon has named it the top book of 2011. I don't often read war books, but this one really captured my imagination. Twenty-four officers went on a joy ride in 1945 on a plane called the Gremlin Special into an area named Shangri-La, on the island of Dutch New Guinea in Indonesia, to bear witness to reports of cannibalistic tribes living in a nearly inaccessible valley untouched by modernity. 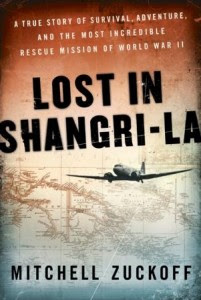 Only three survive the eventual crash, and one happens to be a gorgeous movie-star-like WAC named Margaret Hastings (pictured above), from Owego, New York. Hastings, John McCollom, and Kenneth Decker trek through treacherous terrain from the mountaintop crash with life-threatening injuries, until they make it to an open clearing, where they are in plain sight of warring tribes who spare the strange white visitors only because they think they are gods of some sort.

The sometimes treacherous, but more often touching, dynamics of the warriors, dressed in penis gourdes, and the American crew develop over the seven weeks of the story. They finally leave the valley after military medics and other rescuers parachute in to dress their wounds, get them food, and develop a wild plan to airlift them out by having a plane fly past and grab a separate glider plan by a hook and a rope.

Many years later, interviews with the natives reveal that they remember their visitors from back in the spring of '45 through stories passed down from generations. Shangri-La was soon commercialized to a small degree after the media exposure to the adventure. Missionaries went in, and a town of about 10,000 people sprung up. It is described now as littered with trash and filled with tribe members often wandering around lost begging the few tourists for cigarettes.

This is a quick read and well worth any time invested, especially for anyone interested in the few pockets of primitive people still remaining in the world. Zuckoff probably could have added a little more of the story of the tribes, but there is a lot here. And his reporter-like accounting and structure display a natural storyteller's talent.