Will the Pittsburgh Steelers Win the Super Bowl This Time? 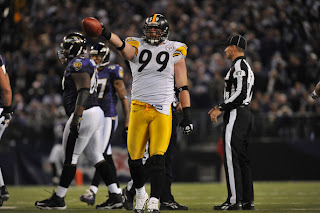 It was a heartbreaking ending last year, losing to the Packers in a thrilling Super Bowl. But good things appear to be on the horizon for my Pittsburgh Steelers, who are picked as the team to beat by one of my favorite sports opinion blogs, ESPN's Grantland. It all starts in about 24 hours, with Game 1 against the fierce rival Baltimore Ravens.


You know, the team that always manages to be in the playoff hunt every year? Them? They're our favorites. The Steelers were 12-4 with a Pythagorean expectation of 12.1 wins despite missing Ben Roethlisberger for the first four games and an offensive line for the entire season. They made it to the Super Bowl with Troy Polamalu at 60 percent and even less of an offensive line, and while they got outplayed by the Packers, they were competitive in the process.
We can keep this very brief: If you want to know why they're our Super Bowl pick, look at the schedule that the gods have gifted these Pittsburgh Steelers. The Ravens will be a weaker team, so the division won't be as tough. They get four games against the NFC West and four more against the AFC South, which looks weaker by the day. (Peyton Manning might be back in time for their Week 3 matchup, but he certainly won't be 100 percent.) And while they have to play the Patriots at home, their other first-place matchup comes against the Chiefs. That has 13 wins written all over it, and if the Steelers win 13 games, they're going to have the no. 1 seed in the AFC. That gives them a better shot of making it to the Super Bowl than any other team in football. And that's why they're the favorites.
Posted by Pop Culture Lunch Box at 11:55 AM