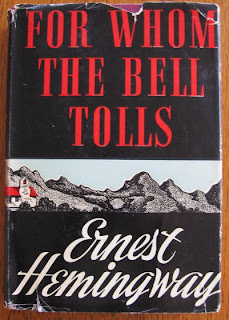 
I don't like 1940's For Whom the Bell Tolls as much as Ernest Hemingway's other master war story, A Farewell to Arms, but that said, this is still better than 99 percent of all other novels.

Robert Jordan is a young American fighting the Fascists, led by Francisco Franco, in the Spanish Civil War, what was a prelude to the gory World War II. He and his elderly guide Anselmo are marching through the mountains of Spain, behind Fascist enemy lines, to meet another similar band of guerrillas, led by the drunken Pablo and his fierce and commandeering wife Pilar. Their plan is to blow up a bridge along with a good amount of Fascist soldiers, who frequently cross the bridge.

Meanwhile, a young girl named Maria has been rescued from starvation, torture, rape, and the execution of her parents at the hands of a band of Fascists. She is convinced nobody will ever be able to love her again, but Jordan convinces her this isn't true and they fall in love.

Along the way, Jordan encounters the remains of another guerrilla leader, El Sordo, and his band that has been slaughtered and beheaded by the Fascists. El Sordo's team was also supposed to help with the bridge scheme, so their defeat makes the plot look even more grim and hopeless. Making matters all the more impossible, Pablo steals the detonator and blasting caps one night while Jordan sleeps, meaning they will have to try and explode the bridge with the more-dangerous method of grenades.

Pablo returns right before the mission is to begin. Jordan uses his original tools and, sure enough, the bridge blows up. But the elderly Anselmo is killed by a flying steel fragment. Jordan, Pablo, Pilar, and Maria are soon trapped by Fascist troops, who fire at them. Jordan insists on being the last of the group to cross a dangerous road, and enemy fire drops his horse right on top of him. The others are able to drag him out of the line of fire, but he knows his leg is crushed. He voices his love to Maria and the others drag her away.

As Jordan contemplates his life in its waning moments, he decides he is not dying in vain. He fought for the common people and he knows he has helped lead them on a long road to eventual victory.

For Whom the Bell Tolls features the classic battle between the hopeful and good Jordan and Anselmo and the despaired, drunken, and bad Pablo. That gives the novel its heft and global meaning, and it is certainly the best story ever told about the Spanish Civil War.