Lemonheads Return With a Glimpse into a 1992 Classic Album

Coming up on 20 years since the release of The Lemonheads' indie-pop 1992 classic, It's a Shame About Ray, it was moving to relive that year the other night at the Black Cat in D.C., with leader Evan Dando and his gang rollicking through a lengthy set with the full album serving as the first part of the evening.

Other than some sound problems for the first three or so songs, with Evan's guitar being too low in the mix, the music sounded great and Evan, who has had his ups and downs over the years, seemed to be in pretty good shape and form. (Apparently this wasn't the case two nights later in New York.)

Some people disagree that he was in fine form. And maybe I'm just too much of a sucker for the dozens of classic songs he and his three-piece band played. (Incidentally, the drummer and bassist were very strong and looked quite a bit like Ray-era bandmates David Ryan and Nic Dalton.) Still, I will admit that this band is by no means anywhere near the prime it was in throughout the early 90s. (I mean, check out this performance on Letterman. They could really throw down, and I even remember talking to Evan one time after a Soul Asylum/Lemonheads show at Mississippi Nights in St. Louis while he was wearing that ridiculous red jacket.) 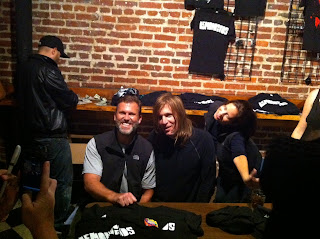 I spoke with Evan briefly after Friday night's show and he was personable, in good spirits, remembered hanging out with me last year at Iota and letting me play his guitar, and spent some time seriously making out with one of his merch girls (while a line waited to buy shirts, open-mouthed and gawking). He also was very open to taking photos with his fans, as pictured here with some guy (and his favorite merch girl).