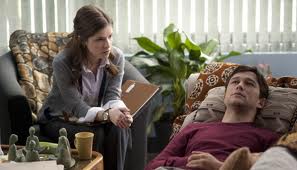 Everything about 50/50 should make it no better than a Lifetime movie about living with cancer. Gordon-Levitt plays a young worker at NPR who pals around with Seth Rogen and has a jerky girlfriend. When he discovers he has the disease, he is befriended by some fellow patients at the hospital. The performances  rise far above a TV melodrama, and make the movie at least worth watching. 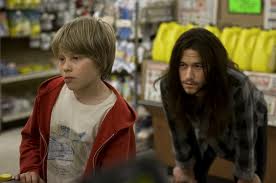 Hesher is just weird. And slow. And pretty offensive. I guess the filmmakers were trying to show that loss can be a devastating thing. The ending (along with the middle and end) are just really ridiculous, meandering, heavy, and none of the sad-sack characters are too worthy of sympathy. Gordon-Levitt plays some sort of troubled but prophet-like Metallica-type longhair. We never really find out much about why he is the way he is. I can't think of a good reason that Natalie Portman (who co-produced it) and Rainn Wilson got involved.

It seems, at least with 50/50, that Gordon-Levitt has gotten back on track after the Hesher misstep. He was putting together a halfway decent little run before that, with Inception and (500) Days of Summer.