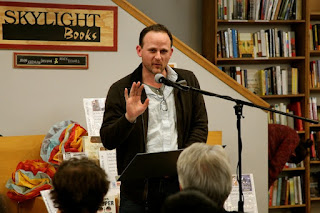 A recent article in The New Yorker turned me on to John Jeremiah Sullivan's hilarious takes on the pop-culture landscape. I purchased his collection called Pulphead: Essays and just finished the first story, called "Upon This Rock," which is no letdown.


Sullivan decides to document the Cross-Over Festival in Lake of the Ozarks, Missouri -- three days of "top Christian bands at some isolated Midwestern fairground." He decides he'll post an invitation for fair-goers to hitch a ride with him as he makes his way there from the East Coast. What he doesn't expect is that the youth experience he's hoping to document is not a bunch of twenty-somethings, but rather mostly prepubescent tweens, who soon attack him online as being some sort of pervert on a "questy missiony thing." 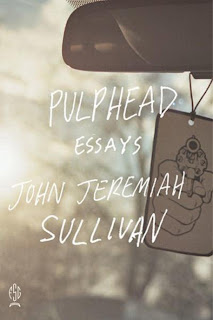 Soon enough, he decides to change plans and instead hit an even bigger Christian rock festival called Creation Fest in rural Pennsylvania, which happens to begin the next day.

Sullivan does a great job in this essay of not prejudging the characters he would soon meet, which would be all too easy to do, especially with this subject matter. He finds the 100,000 people in attendance, in general, "exceptionally kind" and different from the guys at sporting events who generally seem to have a dark machismo and appear to be just waiting for something bad to happen.

He meets a group of West Virginia dudes with whom, surprisingly, he becomes enamored. "They were passionate to make me see what kinds of guys they were." They were hardened by their violent lives and had given all their anger to God. But other than that, they were entirely likable and not much different from non-God-y guys.

Sullivan's take on Christian rock is funny too. He says a Christian band is one that simply has Christians in it and can be quite good, like U2. But a Christian rock band is one that has no desire to be artistic or original because it simply needs to play something "proven to please ... while praising Jesus Christ." It is fail-proof to these audiences because it automatically carries a message that they will approve of. Sullivan speaks almost not at all of the music because it doesn't matter. Either it's fine because you agree with it or "if you think it profoundly sucks, that's because your priorities are not its priorities."

This is the most thoughtful take on an extremely weird and foreign subject matter to me. I can't wait to dig into the rest of the essays in Pulphead, including ones on Axl Rose, reality TV, his brother's near-death electrocution, and more.