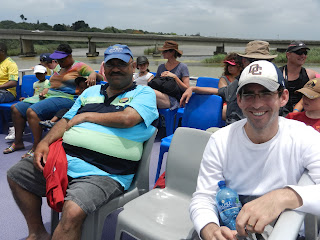 I referred to him in the last blog, as the guy who took us to our safari three hours northeast of Durban, South Africa and even accompanied us on two of our three treks into the bush. But his own story is deserving in its own right.

Anoop Singh (pictured on our boat safari of the St. Lucia Estuary, with my colleague Matt Barrett) was driving some passengers in his minivan about 10 years ago when he was shot in the shoulder and robbed. He lost so much blood that he should have died. He suffered extensive nerve damage, went on morphine for three months, and still has limited use of his disfigured left arm and hand.

He says a preacher healed him and he was able to stop taking the morphine. Although he never drank or smoked, he became born again and cleansed himself of any vices, including gambling. Two days after he was born again, he says his assailant was shot dead.

On another occasion, Anoop suffered a rare eye disease and went blind for 10 days. At least that’s what his doctor said, but he thought it was from straining his eyes from driving too much.

With Singh, the stories kept coming. He claims his first ancestor to immigrate to South Africa, in 1860, had two wives and worked in the sugar fields. After five years of working, the family was given the option of going back to India or getting a piece of the land they had worked on. They chose the latter. He said his family in South Africa now consists of 930 people, and many of them work in the transport sector.

The only one I was really wary of was his claim of being related to Ghandi. Isn’t it a myth that every Indian says he's related to Ghandi, or something like that? Nevertheless, he said Ghandi’s granddaughter, Ela Ghandi, was married to his “granny’s brother," which at least seems pretty feasible.
Posted by Pop Culture Lunch Box at 10:10 AM