Sharks, Warrior Paint, and Pedal Power Over the Weekend in Durban 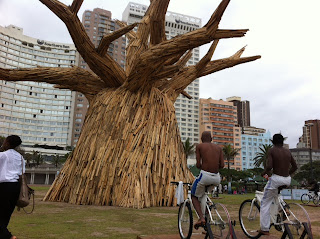 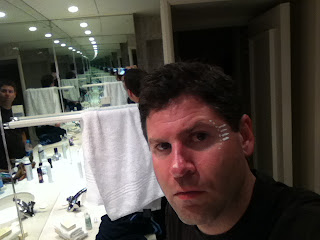 Durban continues to be an interesting city to be visiting for two weeks of work. After attending something called Forest Day, I had an hour or so to walk (and jog again) around the beach near my hotel.

So I snapped a few photos. The best one is of this baobab tree replica. That is my hotel in the background and the energy these fellows are generating from pedaling is lighting up the tree.

On Saturday night, my Nature Conservancy delegation celebrated the half-way point of the UN climate conference by going to Moyo, a fun touristy place on The Point a few miles down the beach from our hotel. Some of the more interesting items on the menu include sprinkbok, octopus tentacles, and snoek. That's some of their entertainment in the photo below. And there I am with my warrior paint on my face, courtesy of our waitress. 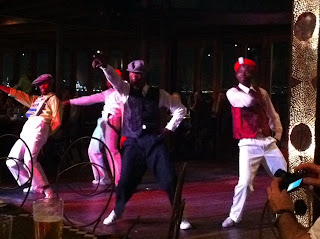 Moyo is at the end of a long outdoor shopping mall and it's next to Durban's allegedly world-famous aquarium, called uShaka Marine World. I'm hoping to get back there because I'm told the sharks swim above visitors while they walk through.

Another thing about sharks off the coast of Durban. Supposedly it is true that this city, where the Indian Ocean meets the Atlantic, sports the highest concentration of sharks in the world. The good thing is that there are nets offshore and they can't get to all the swimmers and surfers. Apparently there's only been one shark/human incident in the past several years, during a storm when a shark was able to get around the net.