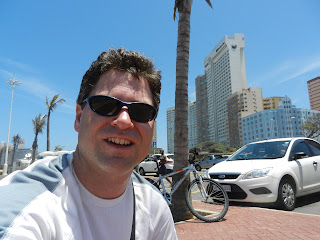 Since my previous travel posts, there has been a lot more I've learned about the fascinating city of Durban, most of it courtesy of our driver for our safari, Anoop Singh.

A fifth-generation Durbanite himself, Singh said the first Indians arrived in 1860 at about the same time the English were building the city outwards, so as not to “cram too many people in.” I reported in a previous blog that the city’s population is 6 million, but Singh said it is between 4.8 and 5.2 million. He was encyclopedic, so I’ll take his work for it.

Some other interesting tidbits courtesy of Singh:

He said the government spends a lot of money on roads, and you can tell. Most U.S. cities could learn quite a bit from the South Africans.

And because of the port, one of the busiest in the world, Durban is located in the most densely populated province of the country.

South Africa is the second-largest exporter of sugarcane behind Brazil – some 550,000 tons each year.

Durban has a beautiful promenade (see photo of me on the promenade with a rented bicycle, and that white building in the background is my highly recommended hotel, the Southern Sun North Beach) that stretches for miles down the beach. The rare times I got some exercise during the climate conference, I took full advantage of it. It was completed in May 2010 in time for the World Cup.
Posted by Pop Culture Lunch Box at 1:01 PM