Welcome to My World for 15 Days: Durban, South Africa 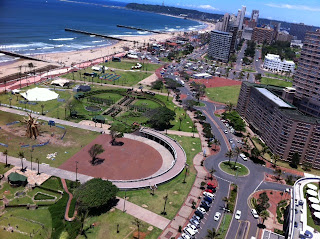 So this is my fourth night in Durban, South Africa to attend the annual UN climate conference and I have yet to post a single blog post. I've been working the usual 18 hours a day and there's just no time.


I stayed in tonight to find some down time, but it's now 1 a.m. and I've finally just stopped working long enought to write this. Not that I'm complaining. It's fun and challenging work. And Durban is really interesting. Here's a little of what I've learned so far.

Durban is the third largest city in South Africa. A guy named Raj, who I met while pedaling bicylces that power up the lights on an art installation in front of my hotel, said it has a population of 6 million.

Durban has the biggest population of Indians anywhere outside of India, which probably explains why most of my meals have been Indian. In fact, Raj called in my meal for me at the delicious Jewel of India restaurant. 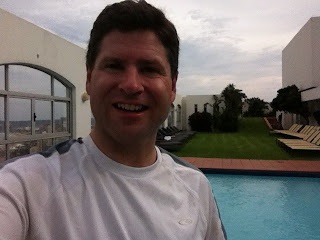 The Southern Sun North Beach lobby staff is the friendliest I've ever encountered at a hotel. I didn't really want to use my iPhone so Robert and Robert (their actual names) found an old phone in the lost-and-found and gave it to me to keep until I check out.

The city purports to be the busiest port in the country, which is why it's amazing that the entire beach front as far as the eye can see from my 22nd floor hotel room is so beautiful. There are restored sand dunes, an amazing skate park, a "minature things" park, and a promenade that stretches for miles along the beach.

Here's something amazing. I've jogged twice down the promenade on the beach in front of my hotel. I hate jogging. But it's nice breaking it up in the middle with some peddling on the aforementioned solar bicycles along the area in front of my hotel, which is called "The Golden Mile."

The rooftop pool, as you can see in the photo, is pretty sweet too. I filmed some interviews of my colleagues for our Planet Change blog there and took a short dip in the water as well.

Some of the bad things about Durban. The rate of HIV/AIDS is 38 percent. The air is polluted, and is especially harsh on those jogs. I'm told that it can be a violent city, and that people don't get mugged, they get mugged and then punched in the face. Luckily, I've only been affected by one of these three so far. I can't seem to get the smog-induced frog out of my throat that's been in there since my arrival.
Posted by Pop Culture Lunch Box at 5:55 PM