Bateman and Reynolds Surprisingly Bring the Laughs in The Change-Up 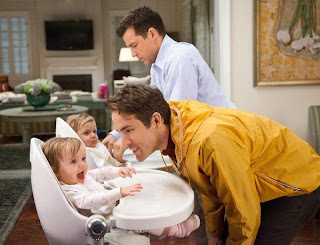 I went into watching The Change-Up with surprisingly low expectations. You know me: I love stupid comedies, especially the ones starring Jason Bateman.

But this one looked to be so bad and unoriginal. And although it is indeed pretty stupid, it's much more aligned with the "bromance" or even "chick-flick" genre than is usually expected of these kinds of silly productions.

Bateman plays a family man who has been too focused on his high-powered lawyer job. He sleepwalks through the abuse that his baby twins shoot at him. Into his mouth, to be semi-specific.

Ryan Reynolds (Adventureland, The Proposal, Harold and Kumar Go to White Castle), like Bateman, is lovable and funny. He plays a stoned playboy. The plot of the two of them switching bodies is admittedly lame, but these two work well as a comedy team, and The Change-Up proves to be a great option for a brain-dead Netflix night of laughs.