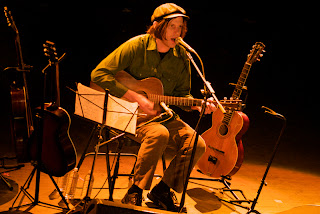 My brother claims Jeff Mangum's In the Aeroplane Over the Sea (by his band Neutral Milk Hotel) is the greatest album of the 1990s, I would only agree to so much as it being in the top 10. Regardless, it meant my brother was dead-set on paying big bucks to get front-row center seats at the Lincoln Theater on U Street in DC on Saturday night. It also meant he needed to drag me with him. It was worth every penny. This show was a *****-star treat.

And my friend Fran Chung wrote such a great DCist review for the Friday show that I'm reprinting it here. The only difference between the Friday and Saturday shows seems to have been that the show I saw Saturday featured more singing along by the audience, which was as into it as I can imagine a critical mass of well-mannered hipsters ever could be.

Having bypassed D.C. in favor of Baltimore last September, Jeff Mangum finally made his long-awaited return to a local stage on Friday night, playing his first show in the District since 1998, the year his former bandNeutral Milk Hotel released its incomparable magnum opus, In the Aeroplane Over the Sea. Kicking off a sold-out two-night stand at the Lincoln Theatre, the reclusive singer-songwriter delivered a memorable, mostly solo-acoustic performance, regaling an adoring (though surprisingly reserved) crowd with some of the most beloved songs in the indie-rock canon.
After erstwhile Neutral Milk Hotel member Julian Koster’s The Music Tapes warmed up the crowd with a whimsically entertaining set of art-pop/prop-comedy, Mangum took the stage and threw his distinctively resonant voice headlong into “Two-Headed Boy, Part Two,” Aeroplane’s wistful final track. As the seated audience applauded warmly, Mangum announced that “it’s okay to sing along,” though only a smattering of fans took up his offer during the ensuing acoustic rendition of “Holland, 1945,” an evocative ode to Anne Frank which sounded a bit subdued without the overdriven guitars and propulsive drumming that helped give the studio recording its ecstatic kick.
Though much of the set list was rightly devoted to songs from the richly allusive Aeroplane, Mangum also played a few selections from Neutral Milk Hotel’s 1996 album, On Avery Island, including the choppy “Gardenhead / Leave Me Alone,” adding a couple of deeper cuts such as “Engine,” to which Koster contributed touches of ethereal singing saw. The post-Aeroplane track “Little Birds” was a stunning mid-set highpoint, Mangum’s vocals sonorously enveloping the theatre as he chanted haunting, dirge-like melodies, his words conjuring a harrowing, surrealistic tale of child abuse.
From there, the performance began to pick up momentum as Mangum worked through a sequence of his most indelible compositions. The infectious “The King of Carrot Flowers, Part One” segued directly into the effusive opening incantation -- “I love you, Jesus Christ! / Jesus Christ, I love you!” -- of “The King of Carrot Flowers, Parts Two and Three.” Mangum gamely hummed the song’s rousing trumpet line, and while his staccato acoustic strumming couldn’t generate the careening, fuzzed-out exhilaration of the album track, it did enough to get a few intrepid fans dancing in the aisles. Much of the crowd clapped along to “Ghost” and added their (still timid) voices to “Two-Headed Boy” but listened in rapt silence during the plaintively magisterial “Oh, Comely,” Mangum giving his most poignant vocal performance of the evening.
Capping the main set (and showing where Beirut’s Zach Condon probably learned a few of his tricks), Koster and the rest of The Music Tapes paraded out to add trumpet, marching drum, and accordion to Aeroplane’s Balkan-flavored “The Fool,” drawing a standing ovation from the suddenly invigorated crowd. Koster stayed on during the encore, coaxing some theremin-like atmospherics from his saw during “In the Aeroplane Over the Sea,” Mangum strumming jangly chords as he declaimed joyfully existentialist lyrics about “how strange it is to be anything at all.” The majority of the audience refused to leave after that stirring anthem, cheering ardently for a second encore which came in the form of On Avery Island’s spirited “Song Against Sex.”
It was probably the most cathartic and synergistic moment of a performance that, while not quite sublime, ultimately held its own in the face of years of fervent expectation.
Posted by Pop Culture Lunch Box at 11:58 PM