Second City Ramps Up the Absurd at Woolly Mammoth with Spoiler Alert: Everybody Dies 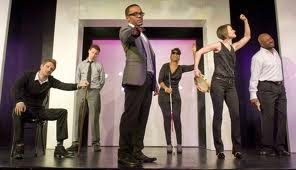 If you haven't been to DC's Woolly Mammoth to catch Second City's Spoiler Alert: Everybody Dies, you've got one more weekend to hop to it. Actually, it's probably sold out, so good luck.

But it's sold out for good measure. This is by far the funniest show I've ever seen at DC's best theater. While the plot gets at something to do with death, mortality, fate, and civilization's impending doom, the real point of seeing this show is that it's like a classic episode of Saturday Night Live, up close and in person.

Aaron Bliden is the funniest actor of a funny bunch, especially in his absurd vignette with a burrito. Scott Montgomery is wildly creepy as a TSA agent who details the personal statistics of several surprised audience members. Maribeth Monroe, of Comedy Central's Workaholics, is hilarious as a leathery casino patron. And James Alfred does a pitch perfect Barack Obama, and even strips a little like he might in real life.

This is a great slice of entertainment, and I hope Woolly continues to go in this direction. A Bright New Boise, which preceded Spoiler Alert, also headed down this absurdist path.