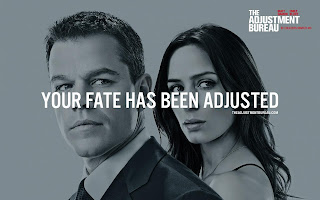 The Adjustment Bureau's weakness may be that it doesn't make us care enough about the two main characters in love. However, we know that Matt Damon and Emily Blunt need each other's love more than they respectively need the presidency of the United States and dancing glory.

That adds just enough of the human touch to the techie action that attempts to swoon these two lovebirds apart from each other. And the doors that lead the couple throughout different parts of New York City and the clues Anthony Mackie, one of the members of the Adjustment Bureau's team, gives to Damon along the way make for a very cool, suspenseful, and mysterious film that is well worth a couple of hours of your time.

The movie is loosely based on "Adjustment Team," a short story by one of my favorite sci-fi writers, Philip K. Dick. Damon plays a hot politician rather than the real-estate salesman portrayed in the original story. The film's ending is not quite as fulfilling as I had hoped, but the intriguing premise develops nicely throughout and we end up satisfyingly learning enough about how certain people are being controlled by powerful forces.