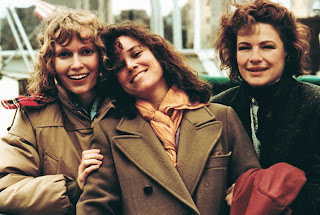 One of those Woody Allen movies that somehow escaped my notice until this weekend is 1986's Hannah and Her Sisters. And while I have to say that it doesn't quite make my list of the top 21 Woody Allen movies, it takes a valuable look at a strange post-disco-swinger, hungover-from-AIDS era and highlights typically great acting from Woody himself, Michael Caine, Mia Farrow, and many others.

Farrow is Hannah, who has sons with an impotent Allen, but they've divorced, and Farrow has remarried Caine. They love each other, but Caine has an affair with Hannah's sister. Allen later gets married to Hannah's other sister. That's really all you need to know about the story. The rest is completed nicely by the usual talkiness injected into Woody's movies. 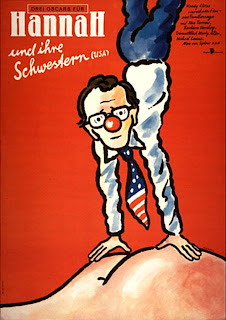 This is a period when he seemed to be moving from more humor to more drama. The excessive drama of this one is admittedly a little off-putting, and I think the best parts remain Allen's scenes, where his neurotic humor is front and center.

Interestingly, Hannah and Her Sisters was Woody's biggest box-office success until last year's Midnight in Paris. It was nominated for best picture, and Caine and Diane Wiest took home the rare double-Academy Awards for best supporting actor and actress. At the time of its release, Roger Ebert called it Allen's best movie.