Civilization Threatens to Bring Down Woolly Mammoth's Season of Apocalypse 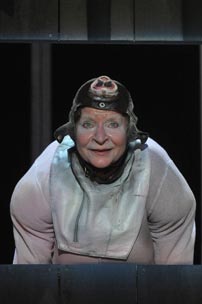 Woolly Mammoth shows are almost always between really good and near-perfect. But Civilization (All You Can Eat), whose run ended last night at the downtown DC venue, is off-the-charts, unexpectedly bad.

I'm not one to hold absurdism against anyone or anything. But this play, which features fine acting performances, simply has a script that prevents the audience from constructing any rationale whatsoever for caring about the characters.

Civilization is about how individuals have odds stacked against them to make it in this world. Sarah Marshall is one of the great regulars of Woolly shows, and here she plays "Big Hog," a fat, all-knowing pig.

The person-conquering mindset of her character, which is creatively costumed, has been done before in classic novels like Animal Farm and Watership Down. It's not clear why we need another riff from this perspective on the cruelty of mankind. I actually think the plot line of Big Hog taking us on the journey to escape the slaughterhouse and make something (or other) of itself could have been quite interesting if something original and exciting resulted from it.

The script by Jason Grote, a writer for NBC's Smash, is just not funny. It's not illuminating in any way. I'm not even sure it's trying to be "deep" in any way. If it is, it fails miserably. The attempt at weirdness in the changeovers is just pathetic and uncomfortable - so absurd that it lacks absurdity. It's certainly clear why the play is 100 minutes with no intermission. At least half the audience would have left, if the comments made all around me were any measure.

A big misstep for Woolly, and one that will hopefully be redeemed with the next show of this season, which, with its theme of the apocalypse, has been otherwise wonderful.