Harrelson Helps Kunis and Timberlake in Friends With Benefits 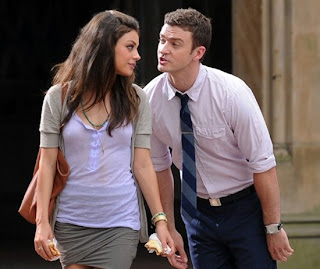 Friends With Benefits is a romcom that carried a ton of buzz into its opening. After the trailer was posted on You Tube, it took only 2 days to reach 1 million views. Special video announcements were made for Facebook and Twitter. And two superstars of the social-media generation (Mila Kunis and Justin Timberlake) were secured to each play their biggest movie roles yet.

The only thing missing was a name. The film was originally called No Strings Attached, but that name was taken by a flick, starring Ashton Kutcher and Natalie Portman, that beat this one to the punch. I guess that means Topher Grace will be the next That 70s Show star in a formulaic movie about friends falling in love. Friends With Benefits was lucky to get out of the gate with this title as well. An unrelated NBC sitcom with the same name is just about set to launch.

So what of the inspired promotional campaign and the uninspired title? The bottom line is that Kunis and Timberlake tend to force their acting a bit, but end up being believable and likable. I'm inclined to say that the storylines of Timberlake's dad having Alzheimer's and not knowing his wife has left him and Kunis' mom as an over-sexed child of the 70s are too serious for the movie's light tone. But, then again, these stories serve to help us understand why the stars have such a damaged view of relationships.

Kunis is a headhunter who helps Timberlake secure a big-time job as art director at GQ. These two are complemented by Woody Harrelson, who plays GQ's sports editor. He appears sparingly, but when he does, he steals every scene. All his lines are golden.

Harrelson, and the chemistry of the two stars, helps propel Friends With Benefits into a better-than-average romcom.