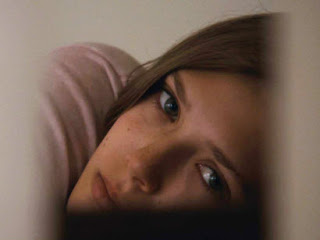 I love exploring the sociological dynamics and behavioral reasoning for why people join cults and what keeps them involved over time.

So the psychological thrill ride of watching Independent Spirit Award winner Elizabeth Olsen (the younger sister of Mary-Kate and Ashley) as the lead in last year's Martha Marcy May Marlene was just too tempting to pass up.

And the suspense is plentiful. While I might argue that the film could pick up the pace at times, I really have very little to complain about. Everything is eerie, especially when reflecting on the work as a whole.

The movie is a series of flashbacks to Martha's time with a dangerous cult in the Catskill Mountains of New York and flash forwards to her time living with her estranged sister and brother-in-law after escaping the cult. She clearly has no sense of how the world works, and the few glimpses into her worldview are simply restatements of the cult's leader, played by the wonderfully creepy and scaly John Hawkes (Winter's Bone, The Perfect Storm, Lost, 24, Eastbound & Down, and From Dusk Till Dawn).

The mysterious ending just adds to the pattern of suspense and makes the viewer feel for the characters even more, which is surprising since the back stories of the main players are not particularly detailed throughout the film's 90 minutes.