The Tree of Life: Sappy or "Important?"

I'm not usually one to rule out something simply because it's artsy or experimental. That is probably why I watched The Tree of Life.

But what a painful and pretentious waste of time. Director Terrence Malick has got nothing here compared to his early-career writing credit for Clint Eastwood's Dirty Harry. It didn't stop the typically-out-of-touch Academy from nominating him for best director. The film was also up for best picture. 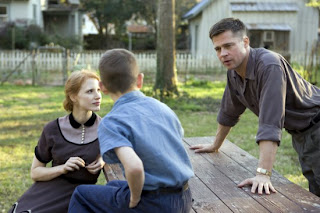 The only nomination I agree with was best cinematography. The Tree of Life is gorgeously filmed and on par with 2001: A Space Odyssey. That said, the Big Bang interludes and dinosaur flashbacks, or whatever they are, couldn't be more boring. The lack of dialogue doesn't help build any kind of story.

Brad Pitt turns in a strong performance as a mildly scary and abusive father in the 1950s. Sean Penn plays Pitt's grown-up son and wanders around aimlessly as if he can't comprehend the fast pace of modern life, with no explanation as to why he entered the urban rat race in the first place.

I understand that this movie was aiming at a deep message about how fleeting everything in life is (except for perhaps that tree in Pitt's yard), but for anyone looking for Hollywood entertainment, The Tree of Life is a real piece of sap.