Fantastic Four Get Re-imagined For Beginners 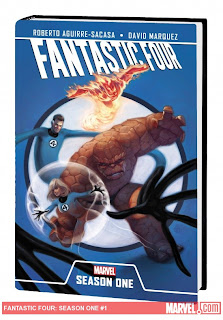 I used to read those Big Little Books when I was a kid and one of my favorites was a Fantastic Four story called "The House of Horrors."

The reason I liked it was probably pretty similar to the reason why The Avengers is doing so well during its opening weekend at the box office and why I loved the Superheroes Saturday morning cartoon that aired in the 1970s. You pack a lot of power into a comic by having loads of super-powered individuals on every page.

Marvel has was appears to be a phenomenal new series. It rethinks the origins of various heroes like Spiderman and X-Men. I haven't read those yet, but the Fantastic Four's "Season One" is tremendously enjoyable and beautifully and colorfully illustrated.

Reed Richards is redone for modern times, making references to Mad Men and other hot pop-culture trends. He takes his friends into a cosmic storm that gives them super powers. Reed becomes plastic-like and flexible, his love interest Sue Storm gains the power of invisibility, Johnny Storm can turn into fire, and Ben Grimm becomes the hulking Thing.

This is well worth a read if you're not a Fantastic Four expert, which I'm not. The origin story is redone in a fun and quick way that gives dabblers everything they need to know about this unlikely team of superheroes.