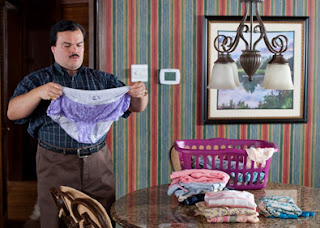 The critics are saying Jack Black turned in his greatest performance and is in the running for an Oscar for his new flick, Bernie.

I would seriously contest the first claim (School of Rock will always be his landmark role and is ranked as my #16 funniest movie ever), but the Academy Award talk seems fair.

Bernie is based on a true story about an odd little man who works at a mortuary in Carthage, Texas and falls into a relationship with a mean old woman played by Shirley MacLaine. Bernie shoots her in the back because he says she is just so mean to him. The movie is unique in that the real people of Carthage offer their testimonies as to how Bernie doesn't deserve to go to jail because he is the nicest person in town.

Well worth watching, and it will be great if Black truly receives an award nomination.

And director Richard Linklater keeps up his string of classics following on Slacker, Dazed and Confused, School of Rock, and Fast Food Nation.