Willy Wonka Would Be Proud of Our Chocolate Tour Today 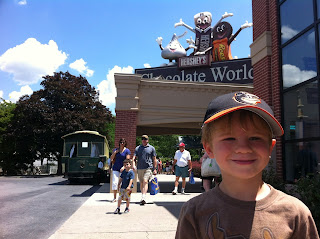 Jackson doesn't watch a lot of TV, but when he does, the thing he requests most often for the past few months has been Willy Wonka. And why wouldn't he? A four-and-a-half-year-old's obsession probably should be chocolate. And nobody could play understated and outrageous like Gene Wilder.

So it was an easy call to make a little boy happy today with a Saturday trip to Hershey, Pennsylvania, which is a little more than two hours away from DC. It's clearly not as cool as the tour Charlie, Veruca Salt, and the others got in Wonkaland, but it was a pretty decent blowing-of-$80 for the whole family. 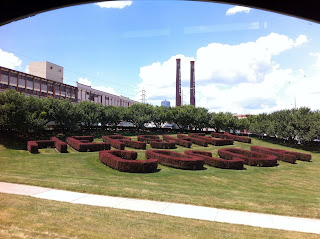 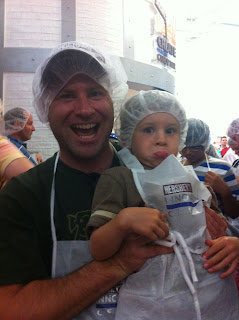 It was well worth the trip, making for a pretty long day. We'll definitely head back in a couple of years when Jackson is old enough to hit the amusement park part of Hershey, which is said to include more than 100 rides, a dozen or so rollercoaters, and a several water rides.

And, just for the record, people truly need to be able to visit an exact replica of the Wonka chocolate factory set from 1971. This trip would have been perfect with a river of chocolate.

Posted by Pop Culture Lunch Box at 12:09 AM No comments:

With Rachel out of town for work and Jackson at the New York lake with the grandparents, I'm living this Father's Day vicariously through Awkward Family Photos.

This 60-photo slideshow is worth five minutes of your time today, no matter whether you're flying solo or with the family.

Posted by Pop Culture Lunch Box at 1:24 PM No comments:

Haven't Read in a While? Now You No Longer Have an Excuse

I love this chart. It is a totally legit list of what kids could read for their summer break. Nice work, Teach.com.

Posted by Pop Culture Lunch Box at 12:57 AM No comments:

Sacha Baron Cohen is a One-Man Riot in The Dictator 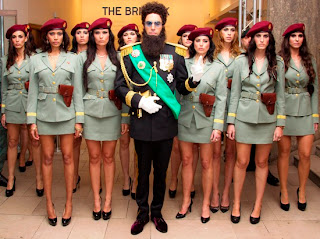 Sacha Baron Cohen has a winning formula in place. He doesn't give us too much, introducing only one new character to us every few years. But when he does release a character, what a doozy it is always proves to be.

The Dictator introduces Crazy Character #4 to the world. I love Ali G, Borat, and Bruno. And I can't wait to see Baron Cohen in 2014 as Freddie Mercury in Mercury. This current role adds another layer to the most politically incorrect actor of our time.

The film is dedicated to Kim Jong Il. Every single race is skewered and roasted. Women and food co-op types are ruthlessly ridiculed. The Dictator pours urine on an Israeli diplomat.

But yet a lot of what makes Sasha Cohen brilliant is that he injects bits that are so poignant and profound, so true, and so shockingly deep and moving into the mix of the underarm and goat-sex jokes. His final speech in New York, where much of the action takes place, is one of the most biting indictments of American democracy that I have ever seen.

If you can get past the crudity and amazing tastelessness of it all (kind of reminds me of Wiener Sausage: The Musical! quite a bit. Several of Baron Cohen's lines and jokes are eerily similar to some in the musical comedy I wrote with Dan Sullivan), you will be richly rewarded with an amazing time at the movies. 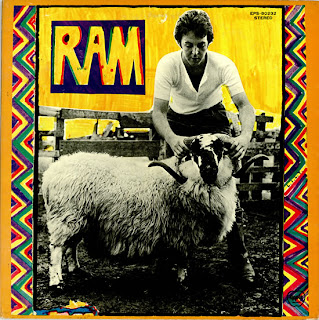 With the advent of Spotify, I now organize my music a little differently before I decide to purchase full albums. I put the ones I'm curious about into a file called "Albums to Listen To" and I make them available offline for my commute and other headphone-listening travels. The ones that hold up over a couple of listens go into my "Albums to Buy" file. The ones that don't get trashed. Life is too short.


So friends can enjoy all of my obsessively diligent work, I then compile a Spotify folder called "Best New Albums," which I update frequently.


So a new related monthly feature here at the Lunch Box is "Best New Albums," which I'll aim to post around the first of every month. You can stream all the albums mentioned for free at my Spotify link above.


Best Album of the Month:

Paul McCartney - RAM.
This was his first major release post-Beatles and it shows that he hasn't lost any chops, just three really great musical collaborators. The remastered version of the original album and plentiful extras make it an essential purchase.

The Beach Boys - That's Why God Made the Radio
This is the best Beach Boys since "Kokomo." They look pretty awkward in the live performances I've seen on late-night TV, but wow can they still harmonize like no others.

Here We Go Magic - A Different Ship
After I read about the band picking up director/hitchhiker John Waters while touring around the country, I had to check them out. Folky and electronic-y, but unusually warm for those genres.

King Tuff - King Tuff
This is actually the best new album I heard all month (since McCartney's is technically not new). The band is loaded with garage, lo-fi, power pop hooks. And it doesn't hurt that J Mascis of Dinosaur Jr. is the drummer.

Best Coast - The Only Place
I had no right to dislike this band's lo-fi indie debut. Everyone raved about it and that's pretty much my favorite genre of music. But something about it bugged me. This one is less noisy and more melodic. And I somehow like it a lot.

Posted by Pop Culture Lunch Box at 1:15 PM No comments:

This article was originally published at Mobility Lab.

I got to spend a night in Richmond, Virginia before a work meeting this week. It’s a place I had only previously known as the point on Interstate 95 where we always pass the big cigarette (also know as the headquarters of Philip Morris USA).

But west of 95 and downtown, there is a several-mile area called "The Fan," which gets its name from the way the streets "fan out" from downtown. Normally, my thing is to visit new towns and rent a bike. There is no better way to see the sights. You get better views because you're going slower than a car and you can stop anytime you like. You also get to see a lot more sights than if you're walking. And you get a little exercise along with your entertainment!

However, the Fan, despite my love of bicycling, is almost perfect for walking. I started my leisurely two-plus-hours walk in Carytown (bottom left in the pictured map, courtesy of the Richmond Metropolitan Convention and Visitors Bureau), made my way north along Boulevard, turned east on Monument Avenue headed towards downtown, then finished up by going south past Virginia Commonwealth University and back west along Main Street.

There were great sights all along the way. In hipster paradise Carytown, I ate oysters on the half-shell and corn ginger soup at Can Can Brasserie and then enjoyed strolling past the famed and beautiful Byrd Theater, known as the first theater in Virginia with a sound system and also supposedly haunted by its original manager.

Walking north past the Virginia Museum of Fine Arts connects me to Monument Avenue and thoughts enter my head about how crucial Richmond's role was in the shaping of the country during the Civil War. It was the capital of the Confederate States of America through much of the war, and the avenue features a who's-who of Confederate heroes memorialized with impressive statues: Stonewall Jackson, Jefferson Davis, Robert E. Lee (monument pictured), and J.E.B. Stuart. Incidentally, hometown tennis hero Arthur Ashe Jr. also has a monument nearby.

I could have continued along after the mouth-dropping mansions of Monument further east to downtown, but it was getting dark, so I veered south at VCU and headed back along Main Street toward my bed-and-breakfast near Carytown (Museum District Bed and Breakfast ... highly recommended). The college students were out in full force along Main Street, as there are dozens of bars and restaurants, not to mention a lot of great graffiti art.

I turned in for the night looking forward to the next time I can get down to Richmond to explore more of the city. Downtown, the Virginia Capitol Building, the Hollywood Cemetery, the  Jefferson Hotel, and the whitewater rapids along the James River are high on my list.

Any other suggestions for places to walk, bike, and easily get to in and around Richmond? Please leave a comment below.
Posted by Pop Culture Lunch Box at 12:59 PM 2 comments:

R.I.P. Ray Bradbury: The Most Backwards Futurist Around 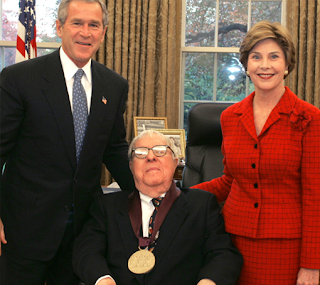 Mashable had an incredible story today on the death of one of my favorite authors, Ray Bradbury. The article details some amazing anti-technology and anti-futurist aspects of the sci-fi writer's complex worldview.


“I don’t try to describe the future. I try to prevent it.”

[He only agreed] to publish Fahrenheit 451 in ebook form in late 2011. When Yahoo approached him in 2009 about publishing a book through its properties, Bradbury reacted violently. “You know what I told them? ‘To hell with you. To hell with you and to hell with the Internet. It’s distracting. It’s meaningless; it’s not real. It’s in the air somewhere. All the computer can give you is a manuscript. People don’t want to read manuscripts. They want to read books. Books smell good. They look good. You can press it to your bosom. You can carry it in your pocket.”

In a 2000 interview, Bradbury appeared wildly repulsed by — and, in some respects, ignorant of — the way the Internet works. “This thing is bound to fail,” he said. “Napster’s out there, stealing everyone blind. They’re stealing people’s work. They should be put in jail, all of them. All this electronic stuff is remote, removed from you. The Internet is just a big scam the computer companies cooked up to make you get a computer into every home.”

Pretty incredible stuff from a man who wrote about the end of books in Fahrenheit 451, the exploration of Mars in The Martian Chronicles, and the fulfillment of childhood desires in Something Wicked This Way Comes.

Posted by Pop Culture Lunch Box at 1:04 AM No comments: