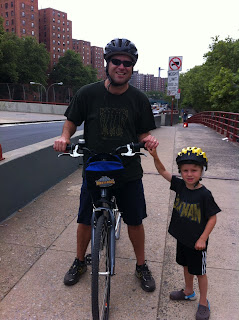 I forgot to write about my spring trip to New York City with my buddy Peter, when we stayed at a hotel overlooking the World Trade Center and took in a bunch of comedy, including a 1:30 a.m. show at the Comedy Cellar with Al Madrigal and a taping of two John Oliver specials. 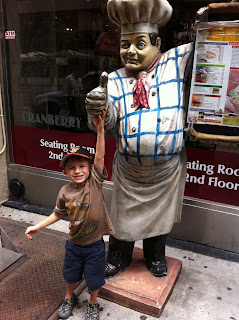 Reasonable hotel options appear to be a theme these days in the Big Apple. Jackson and I took the Amtrak up to meet Rachel this weekend, who is working there for the week. At $125 a night on Priceline, we found the fun Hudson Hotel, in which our room was the size of a cruise-ship bedroom but we had access to a beautiful, funky, and trendy 15th-floor roofdeck, another garden bar and lounge, and a great location on West 58th and 9th Avenue. 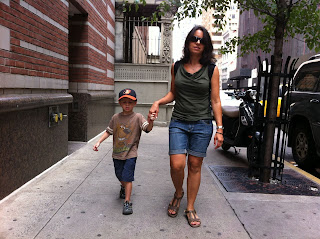 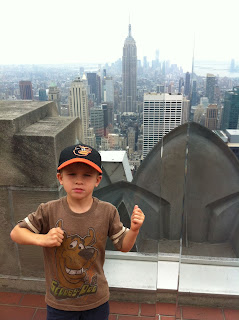 This was billed as a "tall buildings weekend" and Jackson, at nearly five-years-old, is the perfect age to have his first NYC experience. I think it really made an impression on him. He asked several times on the train ride home when we would next return there. 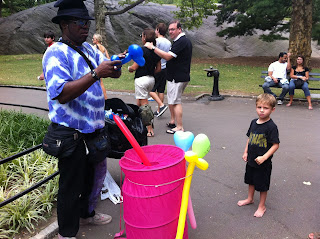 Things went as planned and the little guy did not complain about walking all over the place. 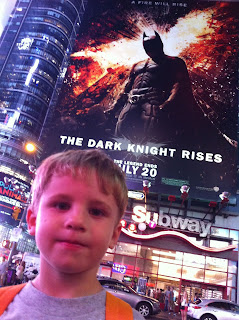 Friday night consisted of walking from Penn Station through Times Square and to our hotel. Saturday was fun in the wonderful Central Park water play area before heading to Rachel's work in East River Park in the Lower East Side. Jackson and I took a bike ride for about six miles along the extensive trails between the Manhattan Bridge and 25th Street. Then we had delicious Indian food with our friend Lori (she's a Jackson fave). Sunday was an easy trip up 30 Rock (thanks co-worker Elizabeth for the recommendation) with no wait and easily a much better use of time than waiting in the always-long lines at the Empire State Building.

And we're back in DC. Why I'm not already asleep, I'm not sure. Goodnight.
Posted by Pop Culture Lunch Box at 12:48 AM