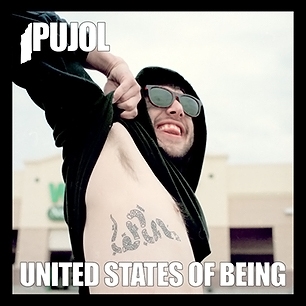 Best Album of the Month
Pujol - United States of Being
Tennessee garage rock that is obscure, but should not be and probably won't be for long. This is high-spirited party rock n' roll, like an even better Kings of Leon or Black Keys. It's all good, but I especially like "Keeper of Atlantis" and "Each and Everyday," which sounds like the best of every decade merging together into one rollicking Foo Fighters number.

Best of the Rest
Shintaro Sakamoto - How to Live With a Phantom
I have no idea who this guy is or where he came from, but it's very Japanese Brazilian tropicalia-ish. It makes me very happy whenever I play it. Samba beats, groovy beach guitars, and soothing backing harmonies. "In a Phantom Mood" is like the great lost Os Mutantes song.

Wussy - Buckeye
This month seems to be filled with semi-obscure recommendations. However, this band has been around for several albums and this may be their best one yet. Male and female vocals run throughout a diverse range of rock styles and sounds, probably best described as a mix of punk and alt-country. It still keeps growing on me after several listens.

The White Wires - WWIII
More 60s AM radio garage punk. This must have been my late-summer theme. These new kids on the scene, from Ottawa, have two records out this year. The first one was called, you guessed it, WWII. Not sure what happened to WWI.

Various Artists - Just Tell Me That You Want Me: A Tribute to Fleetwood Mac
This is an unusual tribute album in that it's really good and interesting. It helps that the Mac's songs are so strong, but groups like Best Coast, The New Pornographers, and Tame Impala shine on original takes.

Hacienda - Shakedown
This is a warm, organic, funky band from San Antonio that wouldn't normally be my thing, but the boogie woogie going on throughout most of this is just too darn difficult not to recommend to just about anyone, even the most hardened and jaded hipsters.

Ariel Pink's Haunted Graffiti - Mature Themes
This is my favorite Ariel Pink release yet, and I'm a little angry I missed their recent show at the 9:30 Club. It must have been weird. There are a lot of obvious Frank Zappa comparisons, but it has been updated to fit in even better into our current era. There are also beautiful interludes of pop majesty throughout, meeting somewhere between Brian Eno, Of Montreal, and Todd Rundgren.