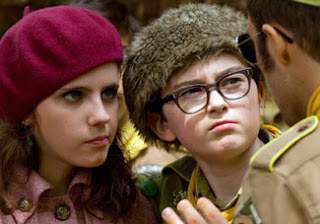 Writer and director Wes Anderson is only a year older than me and he's already created seven films. So maybe I haven't accomplished as much, but at least I've seen six of those seven movies.

I just watched Moonrise Kingdom. It's about a young "khaki scout" and a supposedly troubled girl who fall in love amidst their shared passion for adventure. Those adventures repeatedly take them away from their families, who are constantly trying to get them back. The movie only slightly drags during the ending chase scene, but is otherwise pretty flawless and very funny.

The girl's parents are lacking-in-passion lawyers (Bill Murray and Frances McDormand). His scout master is Edward Norton and the policeman on the runaway case is Bruce Willis.

Needless to say, all these adults turn in hilarious and classic performances. The two kids (breakout stars Jared Gilman and Kara Hayward) are mesmerizing and every bit the oddballs that Max Fischer was in Anderson's finest film, Rushmore. Jason Schwartzman, who played Fischer, is also excellent as an oddball scout leader who has the power to unlawfully marry the two runaway lead characters in Moonrise Kingdom.

This movie receives ****1/2 out of ***** stars and places itself in a dead tie with The Royal Tenenbaums for the director's second-best movie.

And I still need to see Fantastic Mr. Fox. It will truly need to be fantastic to break into those top four movies, some of the best ever.

Do you agree with this ranking?
Posted by Pop Culture Lunch Box at 10:31 PM