This month's list is dedicated to so many great 1990s artists still being around and still being relevant.

Best Album of the Month
Dinosaur Jr. - I Bet on Sky 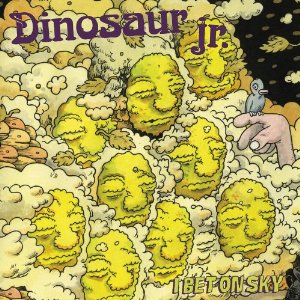 Bringing all the elements of the best Dino Jr. albums (Bug, You're Livin' All Over Me, Green Mind, Dinosaur, and Where You Been), and adding a little bit of string and some Maurice Sendak-like cover art ... what's not to like? I'll buy any new music that J Mascis is associated with for the rest of my life.

Best of the Rest

Band of Horses - Mirage Rock
This album didn't exactly get a lot of love from critics who have grown cynically obsessed with Band of Horses being too likable for their liking. These guys are supposed to be semi-scary lumberjacks, right? Well, I'll just say it: I love the new, poppier direction that this set brings alongside 2010's Infinite Arms.

The Sea and Cake - Runner
This Chicago band is consistently one of my all-time favorites. You can put their music on in the background or you can throw on the headphones and sail away into wimpy, upbeat, jazzy blissfulness. I defy anyone to listen to opener "On and On" and not want to dig back into more Sea and Cake, like classic albums The Biz, The Sea and Cake, and Nassau.

Green Day - UNO!
Seems like there's been a lot of critical bashing of Green Day this year, but there's something to be said about a band releasing three albums in three months (this was the first). All three albums basically feature the same hooks that were on Dookie so many years ago. But darn if those aren't still delicious hooks.

Jason Lytle - Dept. of Disappearance
Remember that album The Sophtware Slump by Grandaddy? Lytle was the leader of that masterpiece, and if you liked that you'll like this ... and anything else he has ever been associated with. His music is kind of like Radiohead without the icky feels-too-important-not-to-like factor.

Robert Pollard - Jack Sells the Cow
Between his three Guided By Voices and two solo albums this year, this release might be my surprise favorite. It is very similar to his 2000s work with the Doug Gilliard-era GBV. Pretty brilliant and necessary stuff.
Posted by Pop Culture Lunch Box at 8:17 PM