You For Me For You. How About None of Them? 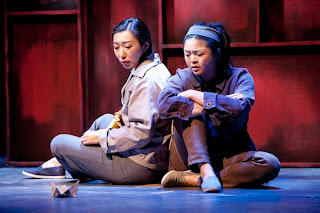 I saw You For Me For You a couple of weeks ago at the Woolly Mammoth Theater in Washington DC and almost immediately forgot the details of the play's content. So reviewing this now is mildly daunting.

But what I do remember is that it was about North Korea, which is, of course, an endlessly fascinating and mysterious place. Unfortunately, instead of taking any chances or being truly interesting, the show stuck to the script that North Koreans think Americans are the crazy ones and, conversely, their fearless leader has them set on the correct course.

Two sisters decide to escape from the country and their miserable lives, but the sister that is starving and unhealthy decides she can't leave. The other sister makes it to the U.S. and embarks on a relatively happy new life. She drops it all, however, as things reach a high point and returns to North Korea to reunite with her sister.

Sounds interesting, actually. But the story plods, the characters aren't particularly interesting, and the lack of chances taken by playwright Mia Chung makes it puzzling that this production seems to be so successful

I've been complaining about Woolly Mammoth's shows for a while now, and I really miss the stuff that once made this theater DC's best. Could it be that theater in general just kinda stinks these days?