Wanderlust Wanders Out of Lust 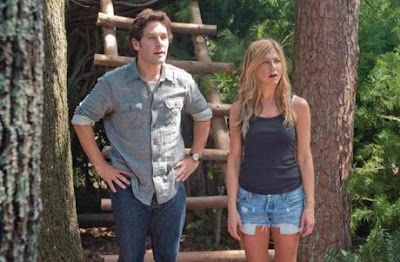 Just that fact that a Judd Apatow comedy starring Paul Rudd and Jennifer Aniston came out a year ago and I didn't see it until now is scary.

I don't miss Rudd movies. Or Apatow. And Aniston is difficult not to love.

But my instincts were right. Wanderlust simply isn't very good. Sure, it's fun at times. And the sight of watching Rudd (and Aniston) trying to join a hippie cult is irresistible in small doses.

Highlights include Alan Alda as a four-decader in Georgia's hippie commune Elysium. He constantly recites the list of names of his fellow founders. Rudd and Aniston end up there after things in New York and Atlanta don't work out. Rudd's scene speaking to himself in the mirror to pump himself up for the free-love lifestyle is classic. Two supporting actors (Rudd's potential love interest, played by Malin Akerman, and his jerk brother, a high-strung and racist Ken Marino) are about as hilarious as they are on the excellent Comedy Central show Children's Hospital.

But too much of the humor and plot wander. The movie doesn't really go anywhere, and the near-impossible task of not really caring about Rudd and Aniston is almost entirely accomplished.