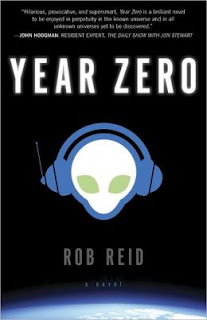 Year Zero by Rob Reid may seem to have a far-out premise to some, but, upon starting the book, I considered it pretty great. Aliens discover Earth's amazing catalog of rock music and attempt to acquire rights to it all.

Many reviewers have compared it to the classic Ultimate Hitchhiker's Guide to the Galaxy, which is certainly one of the best sci-fi novels of all-time. And Reid's style and language tricks are indeed very similar to those of Hitchhiker author Douglas Adams. But the comparisons end there.

Year Zero begins promisingly. The main characters are established and the reader starts to feel a connection with them.

The somewhat-uninteresting aliens visit Nick Carter, a low-level lawyer whom they mistake for a former Backstreet Boy. Ever since they heard the Welcome Back, Kotter theme, they have been obsessed with Earth's rock music. Now they have a plan they present to Carter that they believe will help them acquire all that music. Nick realizes that this may be a good way to undermine his awful bosses and win a girl that is way out of his league.

I loved all that part, but then the second half of the book wallows in a mess of navigating through an unnecessarily complicated inter-galactic journey that never really seems to go much of anywhere. The ending completes the mess when (I don't feel too bad in telling you) Bill Gates is some kind of alien and somehow behind it all. Even that sounds like it could be a somewhat interesting premise, but Reid's story is so convoluted that I had lost the ability to care by that point.