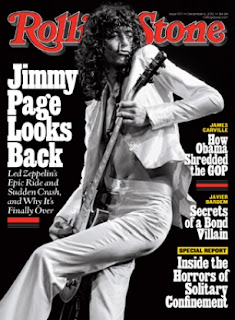 1. Led Zeppelin drummer John Bonham died in 1980 in guitarist Jimmy Page's house, strangled on his own vomit, after drinking 40 vodka shots. This was the end of the band, except for a couple of reunion shows, obviously minus one of rock's very best all-time drummers.

2. Page played guitar on The Who's "I Can't Explain," which is tied for my favorite Who song with "Pictures of Lily."

3. Page never met or saw Jimi Hendrix perform, but he wished he had.

4. The Who's spastically wonderful drummer Keith Moon (perhaps rock's greatest skins man alongside Bonham and the ever-underrated Ringo Starr) was the one who actually came up with the name Led Zeppelin.

5. Page says what makes a great guitar riff is one that's hypnotic because it must be played and heard over and over again. 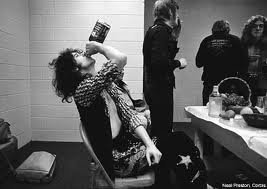 7. Page downplays his debauchery as slightly overstated by the press and biographers. Regardless, I still love this classic tour photo of him swigging Jack Daniel's.

8. Bonus: My five favorite Zep songs, at least today, are: "Tangerine" from III, "Over the Hills and Far Away" from Houses of the Holy, "Going to California" from IV, "Kashmir" from Physical Graffiti, and "All My Love" from In Through the Out Door.