The movers brought all our stuff to our new house on Thursday and, after eight years in nearby Silver Spring, our address is now in the lovely, tree-filled Forest Park neighborhood of Takoma Park.

We have a nice fenced-in front yard and an amazing screened-in back porch and tasteful wooden playground in the back yard. There is a finished basement and a sun room that can serve as Jackson's additional play areas. There are really no negatives, except for leaving all our friends at Eastern Village Cohousing. But we have a good number of friends in our new neighborhood already and the neighbors have been uniformly nice in our brief meetings with them so far.

We're off to the Sunday Farmers Market (pictured above), a hallmark of life in the Republic of Takoma Park, which Wikipedia calls "the Berkeley of the East." Like our former home, Takoma Park borders on DC, and it is novel and kind of nice that the city has a "no nukes" policy, has very stringent tree-preservation guidelines, and is about as progressive as possible in every way.

More on all this later, as well as photos when we get a little more unpacked.

Posted with Blogsy
Posted by Pop Culture Lunch Box at 11:39 AM No comments:

How Does Social Media Fit in to Traditional Public Relations? 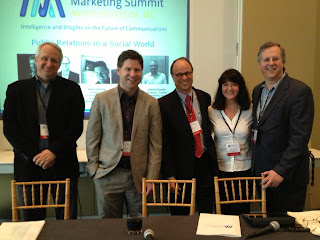 I spoke on a really impressive panel on how social media is reshaping the world of public-relations this morning at the Mid-America Marketing Summit at USA Today's headquarters.


It was an honor to be asked to speak on a panel with the likes of PBS's digital marketing director and other pros.

My main points were:

God of Carnage Throws Our Manners Out the Window 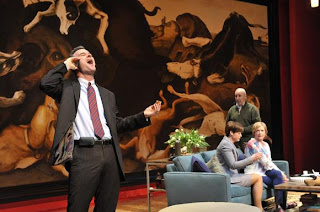 My buddy Tim Getman stepped into one of his biggest roles yet with the excellent God of Carnage, which just wrapped up a very successful run at the Everyman Theater in Baltimore.

Yasmina Reza wrote the play in French and it's been translated to English and performed all over the country. Its popularity makes sense. The story takes the excruciating plot of two couples getting together to discuss their sons' playground fight. We know this can't possibly go as well as the well-intentioned parents think it will. We're just lucky the play only lasts about 75 minutes because the couples would have definitely killed each other if it went any longer.

The pacing of the Baltimore production was top notch, and the four stars had me laughing steadily throughout. The story is also very compelling, as each person shows the ugly side of how we all think we're right most of the time when, in fact, who's to say who's right.