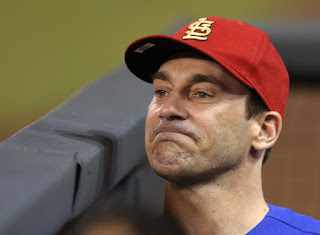 I was reading a recent edition of Rolling Stone, and the cover story was on Jon Hamm, who, as Don Draper on Mad Men, is probably my favorite actor in a TV drama ever.

It was a pretty good article that probably could have been more revealing of its famously mysterious subject, but the article did at least capture much of what I consider the "8 reasons why I love Jon Hamm/Don Draper:"

2. He plays fantasy football. Major props there. Not to mention that he's a former all-state linebacker.

3. He loves Budweiser (meh, I can only tolerate it BECAUSE I'm from St. Louis, but I'd much prefer a craft) and Wilco (now we're talking ... one of my favorite bands). 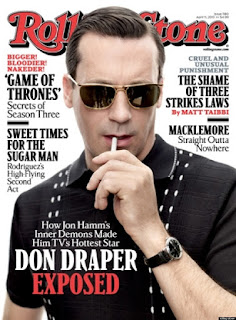 4. All the actors want to please Hamm on the Mad Men set because he's "like the dad" and "they really don't want to let him down."

6. People see Don Draper and they see glamour and authority, apparently a lot of people see their fathers. But I agree with Elizabeth Moss, who plays Peggy Olsen, in that Draper is almost impossible to not stare at and be in awe of.

7. He likes Jeff Bridges as an actor. You have to like that. I mean, Bridges is the Big Lebowski.

8. Rolling Stone writer Rob Sheffield calls Mad Men the "greatest TV drama of all time, and it's not even close. Mad Men is to TV what The Godfather was to the movies."

I would have to second Sheffield's opinion.
Posted by Pop Culture Lunch Box at 12:51 AM