I Now Pronounce You Dumb and Dumber 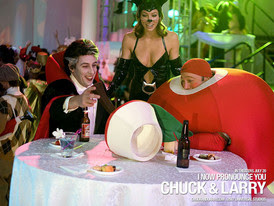 I knew what I was getting myself into, but still, I did it anyway.

After struggling through The Hangover Part III last night, I also cobbled my way through 2007's I Now Pronounce You Chuck and Larry.

At one time, a new Adam Sandler movie was an event. Something I attended with Scoots, Dewey, ET, and other buddies to die laughing for a little while. Well, since it took me six years to get around to this one, it's pretty clear to you that I had low expectations.

And they were 100 percent met. I hoped there would at least be a tiny bit of profoundness in Sandler's take on what it means to be gay in the early 21st Century.

Sandler plays womanizer Chuck and knucklehead Kevin James plays tough-guy Larry. The firefighters have to marry to protect Larry's pension. Jessica Biel often gets in the way when Sandler turns to jelly in her presence.

Of course the film shot to #1 at the box office on the weekend it was released. And to give Sandler a small degree of credit, the movie makes a plea for equality in the star's own childishly crude way. I will say Chuck and Larry is kind of entertaining. The big problem is that it just isn't very funny.