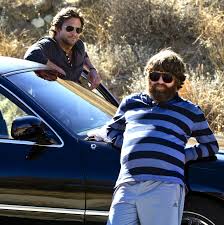 I'm not actually willing to say that The Hangover series should be laid to rest. After I named the original Hangover the best comedy of all-time and The Hangover Part II a solid 4 out of 5 stars, there's still a possibility more Hangovers wouldn't be the worst thing.

However, The Hangover Part III is a true stinker. While the Wolfpack is still somehow pretty cool, they can no longer command the same amount of laughs.

Here are the film's funny moments, in chronological order ...

1. The highway pileup created by the beheading of a giraffe, owned by one Alan Garner (Zach Galifianakis).
2. Alan's singing at his father's funeral.
(A long stretch of a ridiculous and painfully unfunny kidnapping of the Wolfpack by John Goodman.)
3. Chow (Ken Jeong) and Alan's Tijuana kiss.
(At the halfway point, there had still only been three laughs. And that's being generous.)
4. The Melissa McCarthy lollipop/pawnshop scene.
5. The recurring Billy Joel soundtrack to Alan's life.
6. The Alan-and-his-son scene.
(Another very long unfunny stretch.)
7. The farewell scene when Chow tells Alan he's "cold as ice."
8. Alan's closing scene, when he announces he's leaving the Wolfpack.

So, obviously, Galifianakis still has what it takes to be brilliantly funny. But Ed Helms (zero laughs) is shockingly wasted and Bradley Cooper (maybe a half a laugh) is empty.