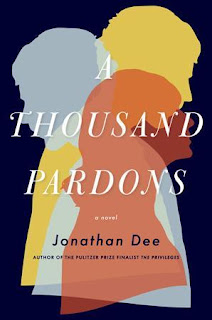 A Thousand Pardons, by George Plimpton's former personal assistant and Pulitzer Prize finalist Jonathan Dee, had me hooked from the first chapter.

Stay-at-home parent Helen Armstead waits for long-time husband Ben to arrive home from his job as a partner at a New York law firm. They tell their adopted 12-year-old daughter Sara that they are going out for their regular date night, which is actually their trip to the ever more and more venomous couples therapy.

Soon Ben finds himself having a ridiculous and career-ending affair with a young underling at work. It goes horribly wrong and Ben and Helen divorce. The long-jobless Helen stumbles a little unbelievably, but so what, into a crisis-communications PR job. Some of these scenes are pretty entertaining as she makes a name as the go-to expert when one-percenters in New York mess up and need to make a public apology.

The story weaves through some strange plots, like the relationship Helen builds with a childhood friend who subsequently becomes a major film and tabloid star and the uphill trek Ben takes to get back into the lives of his former wife and daughter.

The sections focused upon the three-person family are the most enjoyable. None of them seem to care much about anything, but their unpredictability keeps it interesting. Some of the other characters are pretty weak, and there really is no moral or take-away from A Thousand Pardons, but for an easy and quick summer read, author Dee owes us no apologies.