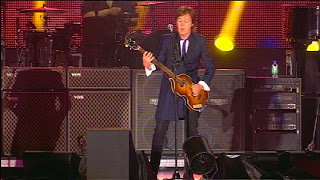 The only way that Friday night's Paul McCartney show at National Park could have been any better would have been if John, George, and Ringo showed up for one of the three encores.

That said, Paul's crack five-piece band might be unbeatable. They started an hour later than expected, but then kicked in to "Eight Days a Week," which has apparently not ever been played live by any of the Beatles until this tour.

That was great, but I literally started to tear up and feel emotional on the next two numbers: jaw-dropping versions of "Junior's Farm" (always one of my very favorite songs by Wings) and "All My Loving."

While there wasn't a stinker among the 2-hour, 45-minute, 38-song set, notable highlights included: 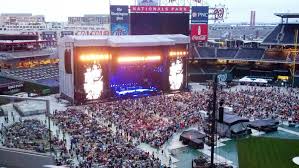 I can die happy knowing that I saw Sir Paul in Indianapolis in 1989 and in an even more perfect show Friday night.

SET LIST:
Eight Days a Week
Junior's Farm
All My Loving
Listen to What the Man Said
Let Me Roll It
Paperback Writer
My Valentine
Nineteen Hundred and Eighty-Five
The Long and Winding Road
Maybe I'm Amazed
I've Just Seen a Face
We Can Work It Out
Another Day
And I Love Her
Blackbird
Here Today
Your Mother Should Know
Lady Madonna
All Together Now
Lovely Rita
Mrs. Vandebilt
Eleanor Rigby
Being for the Benefit of Mr. Kite!
Something
Ob-La-Di, Ob-La-Da
Band on the Run
Back in the U.S.S.R.
Let It Be
Live and Let Die
Hey Jude
ENCORE:
Day Tripper
Hi, Hi, Hi
Get Back
SECOND ENCORE:
Yesterday
Helter Skelter
Golden Slumbers
Carry That Weight
The End
Posted by Pop Culture Lunch Box at 10:20 PM