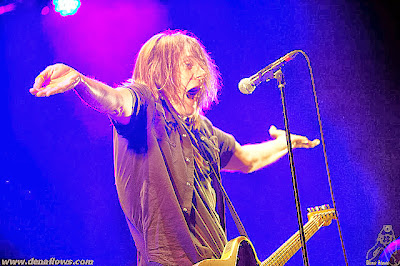 I was 22 years old back on November 12, 1992 the first time I saw Soul Asylum with The Lemonheads. So it was pretty meaningful last week when I saw them almost exactly 20 years later at the 9:30 Club in Washington D.C.

That first show was the second night of Soul Asylum's Grave Dancers Union tour and, from the first row of Mississippi Nights in St. Louis, I was mesmerized by Winona Ryder's boyfriend Dave Pirner (pictured) leading his band through a set that was far more rocking than any fair-weather MTV viewer could guess possible based on their mega-'90s rocking-ballad hits "Runaway Train" and "Black Gold."

Pirner still has the long hair that gives him a slight resemblance to a healthy-era Axl Rose, but any original members of Soul Asylum other than him could not be found on this night. I thought that was going to be a problem, but Justin Sharbono has replaced founding member (and his cousin) Dan Murphy on guitar and performed more than admirably. Those licks must be in the family blood.

But it was difficult to detect any drop-off from '92 when it came to the shows highlights: "Without a Trace" was undoubtedly the best rowdy pop song the band played. "Somebody to Shove" and "Summer of Drugs" were my other favorites, although it was pretty tough to deny the lovability of the aforementioned "Black Gold" and "Runaway Train."

Soul Asylum: **** out of ***** stars
Evan Dando of The Lemonheads walked out from backstage after that '92 show in a red velvet smoking jacket and signed my chest. None of us will probably ever get back to that spot in our lives, so Dando had a long way to go to ever play a show as great as that one long ago. Plus. he only played with his trusty electric guitar and no backing band at last week's show.

That said, the man writes great tunes and any fan of this blog knows that I stand firmly behind claiming he is one of the very best songwriters of the past 30 years. He ripped through a bunch of songs and was entirely pleasant, but not as great as he can be with a full band in a smaller club.

Fountains of Wayne was the headliner. I've always loved this band but this was the first time I've seen them in concert. They too were verging on pleasant but not mind-blowing; however, I headed down from the balcony to the floor and the sound and vibe improved dramatically. The band soon won me over and created many magical moments within their sometimes samey-sounding songs.

But even when the songs sometimes bled into each other, the witty wordplay, talented guitar licks, and heavenly harmonizing kept it fun. Some of my favorite numbers included "I've Got a Flair," "I-95," "Mexican Wine," and "Someone to Love." And, of course, the show ended with crowd-pleasers "Radiation Vive" and "Stacy's Mom."

Detroit Brings Entertainment Back to a Recently Wobbly Woolly Mammoth 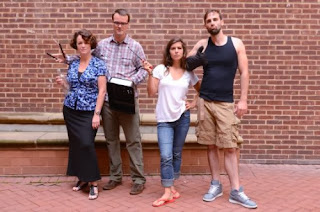 As long-time season-ticket holders at Woolly Mammoth, we've been increasingly disenchanted with the company's choices of productions.

That said, the acting has never been a particular problem. And now that Woolly has a script to match the talent of its performers, we may be back onto something: hopefully the best contemporary theater in Washington D.C.

Detroit roared into town promising a timely statement on our economically-depleted and culturally bereft country, where we can't get healthcare, global warming, education, or any number of essentials right. And much like the end-times fiction of Tom Perrotta, it delivers.

Newest Woolly members (and good friends) Tim Getman and Gabriela Fernandez-Coffey play people married to other spouses. Tim is part of the couple Mary and Ben, who have agreed to a situation where Mary is the breadwinner while laid-off Ben gets his website up and running for his new idea of a company. It appears the darkest thing about them is Mary's propensity to drink a little too much.

Gabriela plays the female in Sharon and Kenny, the wild couple that has moved in next door. She really steals the show with her emotionally-charged and looney treasties of life and how to live it. She is simply floored that she and Kenny are getting to know their neighbors, for instance.

The Woolly is taken over for this show by a BBQ grill and cornhole in the lobby, a totally different stage setup, and loud and large set production. The show, as it reaches a crescendo by its finale, is equally boisterous.

Thankfully, it appears the old Woolly may be back. Don't miss Detroit.