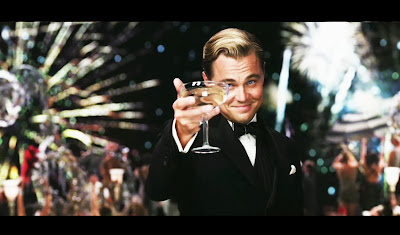 I may be biased since The Great Gatsby has been my favorite novel for a long time, but it's a really tough one to pull off on film.

The new version tries its best with help from a host of gimmicks - namely rap music in the jazz age and over-the-top Moulin Rouge-like production pieces. (I suppose it's difficult to fault Director Baz Luhrmann for trying this approach.)

It's not that these elements are bad, they just happen to be the sections I probably dislike the most about 2013's Great Gatsby, but I think the part that leaves me most unsettled is how the creators spell out every little detail of the characters, plot, and motivations. The best thing about the book, and why I keep coming back to it every five years or so, is that I'm not entirely quite sure exactly what happens. I can't quite fully grasp all of author F. Scott Fitzgerald's intentions and meanings, and I read into it a little bit different every time.

The mystery of Jay Gatsby is, after all, what the story is all about. And the film actually does very well at withholding the secrets for a very long time. But it can't help itself, as Tobey Maguire's Nick Carraway blurts it all out towards the end.

Leo DiCaprio is probably the best Gatsby there may ever be for a film version. (I think this probably falls around DiCaprio's seventh-best movie.) He is dashing, a little bit wacky, and mysterious. Carey Mulligan and Joel Edgerton are also pretty perfect as the shallow and reckless Daisy and Tom Buchanan. Maguire is alright, but I've always pictured Carraway to be an equal in the looks (if not the money) department to his neighbor Gatsby. He is a little too timid for this role.

The cinematography is beautiful and should be a prime candidate for the Academy Award. Some of the dialogue scenes, when the film almost replicates what a stage production might look like, are also filmed perfectly, especially the scene when Gatsby announces he is taking Daisy from Tom.

The rest isn't quite there, but it's saying quite a bit just to pull off The Great Gatsby without it being a total disaster.