Judy Blume a Must Read for Pre-Teen Girls (and Boys, For That Matter) 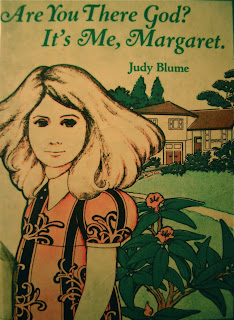 I was never a 12-year-old girl. I also grew up with two older brothers, so I really know nothing about girls. And something about reading Judy Blume's most famous book has always intrigued me.

When we had our baby girl three-and-a-half months ago, I figured I better finally get off the snide and learn a thing or two about what it's like to grow up as a girl. After all, it won't be too long before Zoey will be confronting these issues. I shouldn't be clueless.

Are You There God? It's Me Margaret is essential reading for any pre-teen girl. It should help them recognize that the way they will soon be acting is laughable but serious as well.

Blume explores the trials of young Margaret, who, upon moving from New York City to suburban Jersey, tries to fit in with a group of girls who call themselves the Pre-Teen Sensations. They focus on growing their breasts, the more-developed girl in their class, lists of boys, and getting their periods. Meanwhile, Margaret deals privately with what kind of religion to become, since her father is Jewish and her mother Christian.

This harmless and well-written novel contributes to Blume's status as the "second-most banned" author in American history behind Stephen King. She once said that the book was indeed seen as harmless throughout its first decade after being published in 1970, but that the election of Ronald Reagan in 1980 began a wave of witch-hunt-like book bannings. (That, incidentally, was also the era of Tipper Gore and her band of mothers who attempted to limit access to some rock music.)

I can't imagine that some parents could actually not encourage their children to read this.