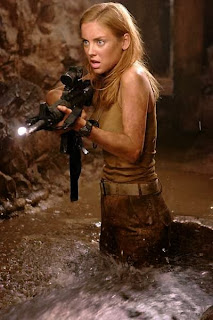 I enjoyed The Hills Have Eyes because I'm a sucker for any horror movie about mutant hillbilly types.

So I decided to dig into 2007's The Hills Have Eyes 2. It's OK, but it's essentially the exact same story, so it loses quite a few style and originality points.

Instead of a family getting lost in the backwoods, this one features a group of mutants living in mines at a military test base and several soldiers seeking answers to a series of mysterious disappearances in the New Mexico hills that look a lot like Pakistan or Afghanistan. I suppose there's something profound intended based on our never-ending series of Mideast wars.

One hint at the low-rent level of this movie is that one of the stars (spoiler alert!) who survives is Jessica Stroup, now relatively famous as Erin Silver from 90210 (an awful show, which I watched for all of its too-many seasons). 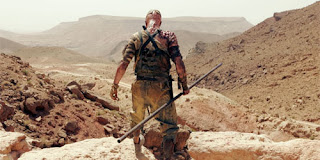 This movie is a far cry from Wes Craven's top work (he is credited as a writer) such as his 1977 version of The Hills Have Eyes, Scream, and Swamp Thing.

My biggest beef is that the mutants have no backstory. I would have liked to see a lot more of them.