The Search for the Perfect, Magical Transportation App

This article was originally published November 20 at Mobility Lab. 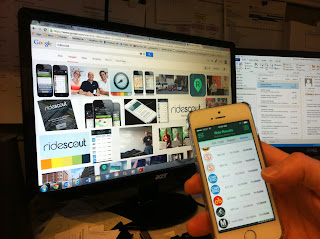 I’m constantly on the look-out for the perfect, magical app that will help me get from place to place.
Biking to work from Maryland to Virginia, as I do almost every day, I used to utilize bikeplanner.org, which helped me find the least-painful routes up the monster hills out of Takoma Park.

But now bikeplanner.org, which also featured the safest and quickest routes on easy-to-view OpenStreetMaps, seems to have died a quiet death.
Sometimes I throw my bike on a WMATA bus or the Metro, but that is no longer as fool-proof in the wake of the NextBusDC app’s also-quiet death. At least you can access the same information online in a browser, but that’s not as convenient when jumping from work to restaurant to bar to home and all points in between.
An exciting contender in my search is RideScout, which had its beta in Austin this summer and launches in Washington D.C. today. The company is showing D.C. some love with a launch party at startup campus 1776 tonight. D.C. Mayor Vincent Gray, D.C. Taxicab Commissioner Ron Linton, several members of Congress, and former White House Chief Technology Officer Aneesh Chopra are all slated to attend.
CEO Joseph Kosper, a Mobility Lab contributor, told me RideScout is a smartphone app that “connects riders with a range of ride-service providers. The RideScout aggregation platform ranks ride-convenience factors such as cost and time to recommend a ‘best ride’ from all ride options available: public buses, transit, subway, taxis via Hailo, limos, shuttles, car2go, Capital Bikeshare, pedicabs, and peer-to-peer ride sharing.”
Kopser began formulating the idea of aggregated ground transportation when he was employed at the Pentagon. He became frustrated with his short commute from North Arlington, and while he had many options to get to work, he had no immediate information or booking capability to take advantage of those options.
The social ridesharing functionality included in the app was born out of his commitment to reducing the number of single-occupancy vehicles on the road.
Mayor Gray approves of RideScout’s efforts. “It’s one of my goals as mayor to help the District of Columbia become one of the healthiest, most livable cities in the country,” Mayor Gray said. “I’m happy to be a part of RideScout’s launch because they are working towards a similar goal – helping to make existing and emerging transportation resources more accessible to all our residents.”
Steve Carroll, director of business development and strategy, noted, “Twenty years ago, the mashup of the internet and the PC enabled sites like Expedia™ and Kayak™ to aggregate sufficient information to allow travelers to search for and book airline reservations from the comfort of their own home. Today, the proliferation of GPS and mobile technologies enables RideScout to link its users immediately with multiple ride options as they walk to the curb.
“RideScout is unique because mobile applications usually link riders with only one mode of transportation, with no way to see and compare options in real-time. Frustrated consumers, forced to reference multiple applications and websites, give up and revert to driving their own cars rather than seek alternatives. RideScout solves that problem,” he added.
RideScout officially launches in D.C. today, but the beta apps have been available in iTunes and Google Play for some time. Users can connect to public transportations options, Capital Bikeshare, car2go, Hailo taxis, DC Pedicabs, and more from the app. The company plans to expand to more cities as it adds national-level transportation providers.
Part of this effort includes improving the social-ridesharing function and allowing users to personalize the app in regards to which forms of transportation they see most prominently.