Where'd You Go, Bernadette is Only Half Fun 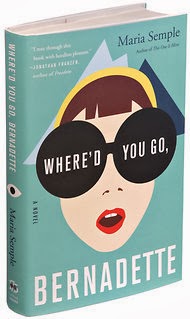 I thought I would love this book, having been authored by Maria Semple of Arrested Development, Saturday Night Live, and Beverly Hills 90210 writing fame.

And indeed I did voraciously suck in the first half, but the second half left me cold with a boredom-inducing adventure through the Antarctic to locate the Bernadette from the title of Where'd You Go, Bernadette.

Many pop-culture landmarks are touched upon, with Bernadette Fox having won a Genius Award in her youth before settling in as an unemployed and cynical private-school parent (or more like a friend) to daughter Bee and cold-fish wife to Microsoft fellow-genius Elgie Branch.

Elgie is on the verge of getting Bernadette institutionalized while he is half-heartedly carrying out an affair with his co-worker. But then Bernadette disappears. The novel is a decent study in family dysfunction. And the characters are fairly memorable, but they are also almost roundly unlikable.

I was kind of bummed I had spent so much time with these kooks. This one is, unfortunately, no I Love You, Beth Cooper.