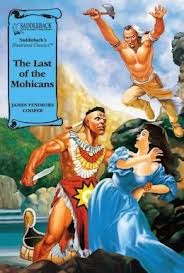 Most people today – when they think of The Last of the Mohicans – might cite a reference to the 1992 movie with Daniel Day-Lewis or the fact that the Hawkeye character from M*A*S*H was nicknamed that by his father as a tribute to the book.

That book is a real powerhouse and was published way back in 1826 by James Fenimore Cooper, who can safely be called the first major novelist in U.S. history.

Cooper notably came of age on his father’s huge property along the Susquehanna River in Upstate New York. As more people moved in around this land, the village eventually was named Cooperstown – now home of today’s baseball Hall of Fame museum.

Cooper grew up around both Indians and pioneers, so he brings a great first-hand knowledge of what life was like in the area during the war between France and England that had spilled into North America.

A small group of British settlers is trying to make it from one British fort to another before French troops can attack them.

Hawkeye, a brave and savagely civilized white scout is recruited – along with some of the dwindled Mohican tribe – to lead the group on their dangerous journey. At one point, they are trapped in a cave by the enemy when Hawkeye and the Mohicans are persuaded by two British sisters Cora and Alice to escape by swimming underwater down river.

Cora and Alice are captured, by Hawkeye and the Mohicans survive and track their captors, led by Magua, a displaced Canadian Huron Indian who had once been beaten by the sisters’ father. He swears to capture them and take Cora as his wife and slave. Cora, a tough chick to say the least, wasn’t buying it, and just as Magua is about to massacre his prisoners, Hawkeye and the Mohicans swarm in, killing all the Huron gang except Magua, who escapes.

They make their way to their intended destination and the women are reunited with their father, but it is not long before Magua and the French invade and a bloodbath ensues. Again Magua kidnaps Cora and Alice and takes them into the woods. Again Hawkeye retrieves them and also saves Uncas, who is the “last Mohican” of the title. Believe it or not, there are more back-and-forth kidnappings of Alice, Cora, and Uncas before this epic tale ends.

Magua and his cronies kill Cora and Uncas before Hawkeye is able to use his rifle to shoot and kill Magua as he dangles precariously at the edge of a cliff. A sad ending and, as we knew it would happen, “the last of the Mohicans” expires.

Except for the slightly wordy and outdated language within the book, frontier tales don’t get much more important, adventurous, and rollicking than this.