"The Apes of Wrath" Sets a High Monkey Bar 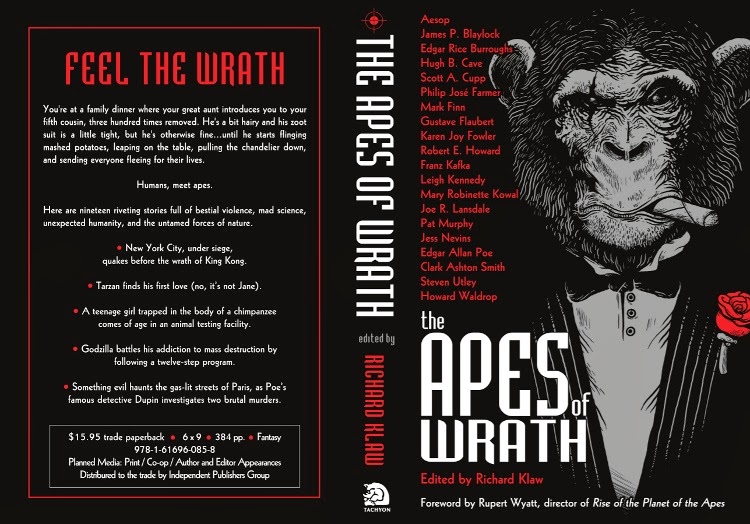 Let's face it. I'm a monkey boy. I love apes. So the new short fiction anthology by Richard Klaw and Rise of the Planet of the Apes director Rupert Wyatt called The Apes of Wrath is for me.

It starts slow with "The Ape-Box Affair" and "Evil Robot Monkey," but takes off in a big way from there.

"Tarzan's First Love" comes from the sixth book of Tarzan tales by Edgar Rice Burroughs. It tells the tale of Tarzan, a boy of German royalty who has been raised in the jungle by apes. He falls in love with ape Teeka. He ends up letting Teeka go to the ape Taug because it seems more natural, but Tarzan's struggles identifying his own origins are fascinating.

The book ramps up with the highlight of what I've read so far, "Rachel in Love," by Pat Murphy, from 1991. Rachel is a chimp who lives with a human neurologist whose daughter has died. The doctor figures out a way to save his dead daughter's brainwaves and transpose them onto the chimp's brain.

Rachel struggles with wanted to be a blonde-haired little girl again, but she also recognizes that her gnarled, hairy hands will never allow it. Her father's lab is raided one day and she is captured and taken to a place where experiments are performed on monkeys. She is expected to mate with an ape named Johnson but instead falls in love with the drunken janitor at the facility. When that goes wrong, she and Johnson escape and have to make their way back across a barren dessert to get to her father's abandoned house.

"Her Furry Face" by Leigh Kennedy entails Orangutan Annie learning sign language for her keeper Douglas. The two develop a deep relationship that seems to wear on Douglas' girlfriend Therese. He is no longer in love with Therese, at least in part because he fantasizes about having a love affair with Annie, even going so far as to try to have sex with Annie. It is a disturbing read, and Annie goes from being an incredibly learned monkey who writes a published children's story to no longer caring about her bizarre craft.

Can't wait to read the rest of this anthology sometime soon.

Email ThisBlogThis!Share to TwitterShare to FacebookShare to Pinterest
Labels: Books, Monkeys, Rise of the Planet of the Apes, Science Fiction