Worst Movie of All Time? You Decide on Movie 43 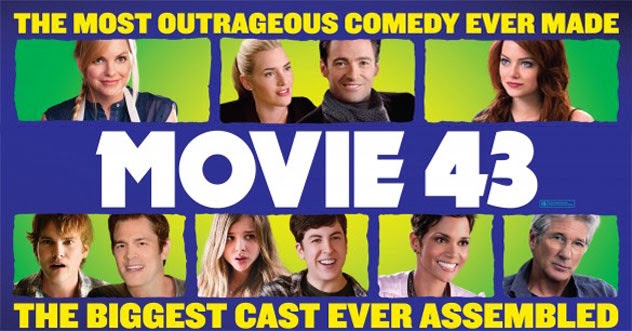 Many critics have called Movie 43 the worst film of all time.

That’s a bit of a stretch. Since you’re reading Pop Culture Lunch Box, you probably don’t have an allergy to wacky tastelessness, and I would recommend you waste 94 minutes of your time on this start-studded hot mess.

Actually, let me amend that. The five best sketches (there are 16 in all) are front-loaded at the start. Once Justin Long, Jason Sudeikis, and John Hodgeman’s “Superhero Speed Dating” kicks in, it is all severely downhill and this laughfest quickly becomes a seriously amateur stinker:


Although these five segments would get a higher rating, the movie as a whole (which, I should mention, is loosely held together by the fact that these are all skits proposed as part of a movie pitch from a washed-up Dennis Quaid holding movie executive Greg Kinnear at gunpoint) only gets: