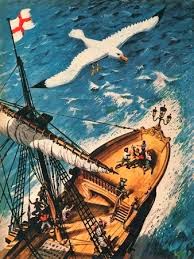 If you’ve ever heard the phrase, “an albatross around one’s neck,” which pertains to certain levels of guilt, then you’ve been touched by one of the most famous long-form poems in history, Samuel Taylor Coleridge’s Rime of the Ancient Mariner.

The 1798 poem was released to mixed reviews but has since become a staple of high-school and college classrooms. Some of the popularity for that age group is no doubt due to Coleridge’s opium addiction and the wild, fantastical, even trippy visions he presents.

Opium was a difficult topic for Coleridge, who probably wrote the Rime in response to his feelings of haunted remorse from his addiction, which he initially picked up as a pain reliever in a hospital stint.

His high-seas tale is a quick read and was well worth revisiting for me all these years later. It’s the story of an old-gray haired mariner who stops three young men on their way to a wedding to tell them his tale.

The old man and his crew leave port without a care in the world when the wind soon grabs the ship and forces it towards the South Pole. However, a bird, the albatross, appears and seems to guide the ship out of its southerly current and back northward.

The mariner grows tired of the bird’s presence and shoots it, which leads to a feeling of great loneliness in the man. Once the ship reaches the equator, it again stalls. The crew becomes famished and thirsty, and angrily hangs the albatross around the mariner’s neck as a symbol of his guilt.

Still stranded, a mysterious skeleton ship pulls alongside their own and Death boards, killing more than 200 men, all but the ancient mariner, who has to live on to contemplate his sin against nature.

The dead crew haunts him until, one day, he comments about the wonders of the animals he watches from the ship. The spell is broken, the crew reawakens, and the ship resumes its journey. Another round of fantastical mysticism occurs - arguably not necessary - but eventually the ship is destroyed and the mariner is saved by another boat.

Find the other parts of this ongoing series of "Classic Reads" in the Books section.
Posted by Pop Culture Lunch Box at 9:59 AM