In a Past Year of Powerful Films, Dallas Buyers Club Stands Strong 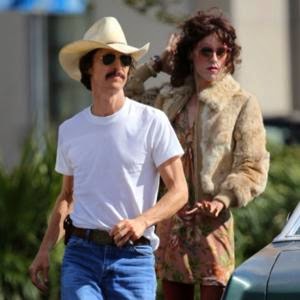 Matthew McConaughey may have seemed a bit of an egotistical jerk lately, but if Dallas Buyers Club is an indication, his acting is high art, and he deserves to be a show-off showman.

I would argue that Chiwetel Ejiofor of 12 Years a Slave was royally ripped off for losing the best actor Oscar to McConaughey, but that really shouldn’t take anything away from his performance as Ron Woodroof, a real-life AIDS victim in the 1980s who started a club in Texas for patients seeking an effective drug smuggled in from Mexico that the FDA refused to approve.

The actor’s performance is so powerful because of the transformation he makes from a rodeo-riding, racist drug and sex addict to a compassionate and successful businessman. He lives much longer than he is supposed to, and in that extra time, he forms a deep bond with best supporting actor Jared Leto’s Rayon, a weird transgender woman with advanced AIDS and just enough secret money to help make the Dallas Buyers Club the place to go for sick patients shunned by the mainstream medical establishment.

The story is fascinating, and it’s unbelievable that the script wallowed in Hollywood for years. At one point, Woody Harrelson was going to play the lead role. But once it was green lighted, the actors were all in, with Leto and McConaughey again going beyond the call. McConaughey stayed in his Texas mansion for six months to get pale and weak. Leto stopped eating at points along his way to losing 30 pounds.

I really love this movie. You could say it’s one of the many arguments for universal health care, and that it’s yet another emotional plea from Hollywood for the medical establishment in the U.S. to get its act together.