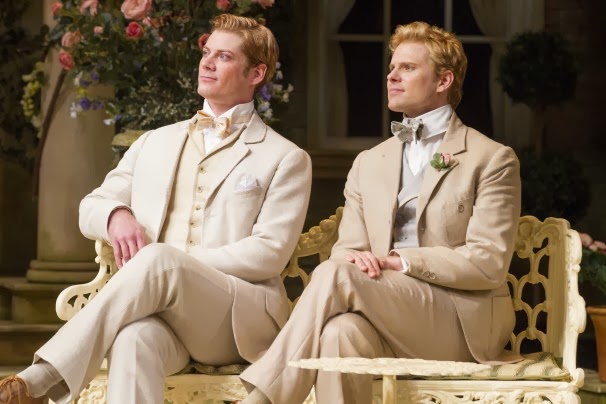 Before there was a Woody Allen or a Steve Martin or a Jerry Seinfeld, there was Oscar Wilde to deliver the funniest one-liners (a quote of Wilde's appears at the top of this very website).

So if a theater troupe sticks to the script of his best play, The Importance of Being Earnest, it would be pretty difficult to screw up. Playing now at the Shakespeare Theatre Company's Lansburgh Theatre in Washington D.C., the show is rib tickling and stylishly impeccable.

The story revolves around two handsome young men named Algernon and John, who both pull off a ruse to win the women they want by renaming themselves both Earnest because their ridiculously shallow paramours pretty much refuse to date anyone not named Earnest.

As if that premise weren't wacky enough, throw in one of theater's most classic characters, Lady Bracknell, and you've got yourself a Monty Python or a Fawlty Towers or a Saturday Night Live of social commentary (and plenty of trivial nitpicking, which is often the best social commentary) for the Victorian set.

I have some concerns about the show, which runs for a couple more weeks.

Sian Phillips, who was once married to Peter O'Toole, plays Bracknell at a steady pace, dispensing advice about manners and social standards in every line. That's definitely part of the way this character should be played, but I still would have preferred a more outlandish performance. I always picture Bracknell as a larger-than-life rage of a woman, and Phillips takes the route of barely lifting a finger or turning a head.

I felt there were also some lulls in the action at times, when it almost seemed like the cast was sleepwalking through all that wit rather than pouring their full amount of energy into it.

But, again, when you've got this much impeccable source material, the audience-enjoyment level is almost a lock. Especially for anyone who hasn't seen or read this play, I highly recommend jumping on tickets while this production is thankfully showing.

Posted by Pop Culture Lunch Box at 7:06 AM